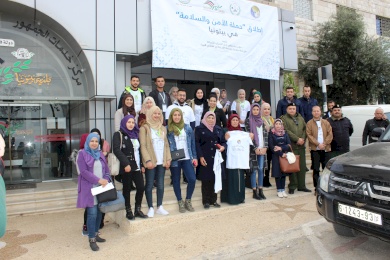 Ribhi Dawla the Mayor of Betunia Municipality said: " The campaign came to cooperate with the staff of the municipality of Betunia to inspect the water channels, to ensure a safe winter for all citizens.

The Project Coordinator of the program Hanan Sabbah said:" We choose Betunia based on statistics of civil defense, which confirms that the region suffer from accidents during winter which cause flooded houses and streets.

The campaign included ten sites in the municipality of Beitunia. According to Jafar Shbeita, Public Relations Officer in the Civil Defense / Al-Bireh and Ramallah, the water channels were cleaned so as not to become an obstacle to the citizens in the winter.

Karam Abu Hala, Executive Director of the Al-Bireh Cultural Club, referred to the role of volunteers in the campaign, where many students were involved to strengthen their community role.