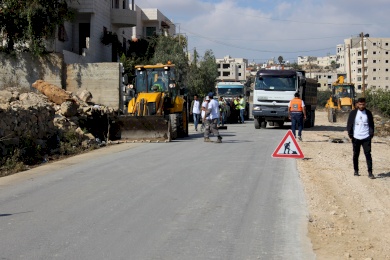 On Wednesday, the National Coalition for Social Accountability conducted a campaign to clean up the Water channels in Dura village south of Hebron as part of the road safety and security campaign.

The volunteers of the National Coalition participated in cleaning  these water channels on the streets of Kanar al-Tahta and the Sanger that connect the city of Hebron to the town of Dura and are considered one of the most important streets in the town.

Mayor of Dura: The initiative supports the municipal plan.

On the other hand, the mayor of Dura Ahmed Salhoub assured on the importance of this campaign between the National Coalition and Ta'awon on the one hand and the municipality of Dura on the other."The municipal staff are fully prepared to cooperate with all initiatives aimed at preserving the environment," he said.

He pointed out that the staff of the municipality put in place a plan about two months ago to clean the water channels  in preparation for winter, and this initiative came to support the municipal plan that will be implemented in all the streets of Dura.

The Director of the Public Works Department in Hebron Governorate, Salah Rabei, said that the public works since morning have put all of their resources on this campaign, assuring the need to continue such campaigns to prevent the streets from damage and contribute to cleaning them especially in  winter.

Kasbari: We choose Dura because it have many problems.

The Director of Partners for Social Accountability Program Suhad Kasbari said " The Coalition Choose Dura according to studies that indicated  problems in water channels in the city.

Kasbari pointed to the great cooperation between the institutions participated in this activity especially Dura Municipality, and Public Works Department in Hebron Governorate for making this job easy through their staff to help the Coalition Volunteers.

Ola Rjoob a member of The National Coalition said: " The Coalition elected and formed by local committies and as an out put of Partners for Socail Accounatbility Program. This is the second activity for the Coalition in the west bank while the first one was in Nablus villages.

Wattan TV prepared a report on the launch of the Coalition a Campaign of safety and security on roads in Governorate of Nablus, the campaign started to implement joint activites with the Civil Defense, the Red Crescent, public works and village councils in the villages of Salem, Deir al-Hatab and Azmout, east of Nablus, and with the support of a number of volunteers.